Becoming creative partners with those who produce creativity with wings. Sounds good, no?

With Gomorrah Sound, Red Bull tells the stories hidden in the soundtrack of the record series.

Each musical track accompanies important scenes and interprets the feelings of the most beloved and most feared characters.

Entering the clan is a dream that loyal viewers and simple admirers won’t confess to having and music can make it a reality.

Every character in the series has a predominant emotion and a song that represents them. To discover which personality you resemble the most, all you need is a selfie.

Through the use of facial recognition, your emotions can be read, using facial expressions like musical scores.

If your face sounds like that of Savastano or Conte, you can find out which family you belong to.

The rest will be discovered in the documentary, to be viewed exclusively on Red Bull TV. 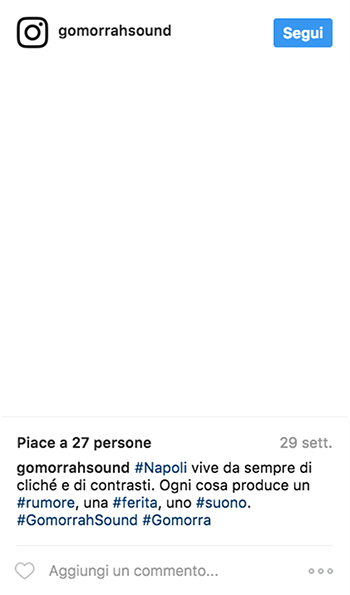 Thousands of selfies, emotions and songs shared. An Instagram profile to use as a map to discover the places, monuments and secrets of Gomorrah.

The impact has been impressive, especially among fans of the series. An impact that has been translated into a success for views of the exclusive premiere of the documentary on Red Bull Tv and the online replays.